A Beginner’s Guide to Lime Plaster and Lime Render

Lime plaster is made up of sand, water and lime. There can often be confusion due to the fact that the term lime is used to refer to a huge assortment of different products some of which go by different names that mean the same thing.

When it comes to Lime Plaster, we’re usually referring to non hydraulic lime which may be referred to as hot lime, lime putty or fat lime. Lime plaster can also sometimes be confused with cementitious plasters containing lime. Below we’re going to try and explain the different terms used within the construction and restoration industry as well as the benefits of using each product.

Non Hydraulic Lime is softer and more flexible than it’s hydraulic counterpart and sets at a slower rate. Hydraulic Lime sets faster and is more durable, with similar properties to cement. This makes hydraulic lime ideal for exterior work as a lime render, especially when damp conditions are expected.

For more on this topic, see our blogs on Hydraulic and Non-hydraulic Lime or What is Lime Mortar?

Lime Putty is another name for non hydraulic lime. Lime putty is made by the process of slaking which is the addition of water to quick lime (CaO) – hence the names slaked lime and Ca(OH)2 in the list below.

Ecolime have developed our own unique slaking system which enables us to produce consistently perfect Lime Putty, free from impurities and contamination. Our Lime Putty is a highly refined Limestone based putty slaked from finely ground particles (90 microns – less than 1/10th of a millimeter) which results in a smooth putty that requires no sieving.

Lime putty does not set underwater and will only harden with exposure to the air in a process called re-carbonation.

You may see Lime Putty being referred to as any of the following:

With so many names for one product there’s no wonder there’s so much confusion and misinformation around. Ecolime pride ourselves on being experts on Lime Putty and everything Lime related so remember you can call us on 01653 648566 at any time for more information.

This brings us to Lime Plaster, which as mentioned earlier is made up of sand, water and lime. The lime in question is usually Non-Hydraulic Lime, which of course is also known as Lime Putty. Incredibly, the use of Lime Plaster dates back as far as 7200BC where statues sculpted in Lime Plaster were found buried in a pit at the archaeological site of ‘Ain Ghazal in modern-day Jordan. This is a perfect example of just how durable Lime Plaster is as a building material.

Often products can be used as both a Lime Plaster and a Lime Render as the Lime Putty used is durable enough to withstand the weather conditions encountered in external use. This is just one of the many benefits of using lime plaster or lime render. Though this is dependent on climate and geographical location. For any help choosing the right lime plaster please do get in touch.

One of the biggest benefits of Lime Plaster or Lime Render is its insulating qualities. Our Unity Lightweight Insulating Plaster is what we at Ecolime see as the future of lime plastering for base coats. 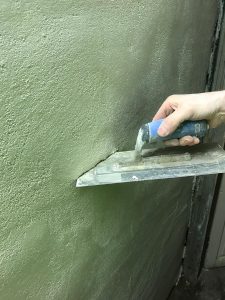 The benefits of insulating lime plaster include:

Ecolime are market leaders when it comes to all things lime. Whether you’re looking for Hydraulic Lime Plasters or Non-Hydraulic Lime Plasters, we have everything you could possibly need for your project. If you’re unsure which product is the best fit or how much you will require, we’ll be happy to answer these or any other questions. Just give our lime experts a call on 01653 648566.